Question: what is easy to wear, comfortable, versatile, and cute? Answer: a shift dress!

Shifts as we commonly refer to them today are, in essence, a columnar-shaped dress with no defined waist. They can be mini or to the knee. They are most typically sleeveless, but there are definitely shifts with sleeves. Compare this shape to the sheath dress (the two are often confused: the sheath hugs the body while the shift does not).

When I began researching this post, I thought it would be easy since shift dresses are, well, "easy." The history of the shift and its development into the garment we know today is actually rather complicated--and fascinating.

It all goes back to the chemise, a plain, straight garment, usually of a lightweight fabric such as muslin. Chemises were the primary undergarment worn in the eighteenth (and part of the nineteenth) century. They were worn next to the skin and so absorbed sweat and body oils; they could be easily laundered (well, as "easy" as doing laundry was in the days before wash machines and running water!) while elaborate dresses adorned with trims and jewels could not. Marie Antoinette--always a risk taker--briefly popularized a garment called la gaulle, which consisted of light and airy unconstructed (for the most part) layers of muslin. Please remember that upper-class women typically wore dresses with very tight torsos with panniers over the hips and voluminous skirts. Fashionable ladies of course followed suit, but the French people were scandalized: they felt the dress looked like a chemise, and they were horrified that their queen would wear her underwear in public (Queen Marie was already not at all popular with the general public due to her somewhat eccentric ways and her quest to find some simplicity away from the over-the-top atmosphere at the French court). The garment became known as a chemise à la reine (the queen's chemise). 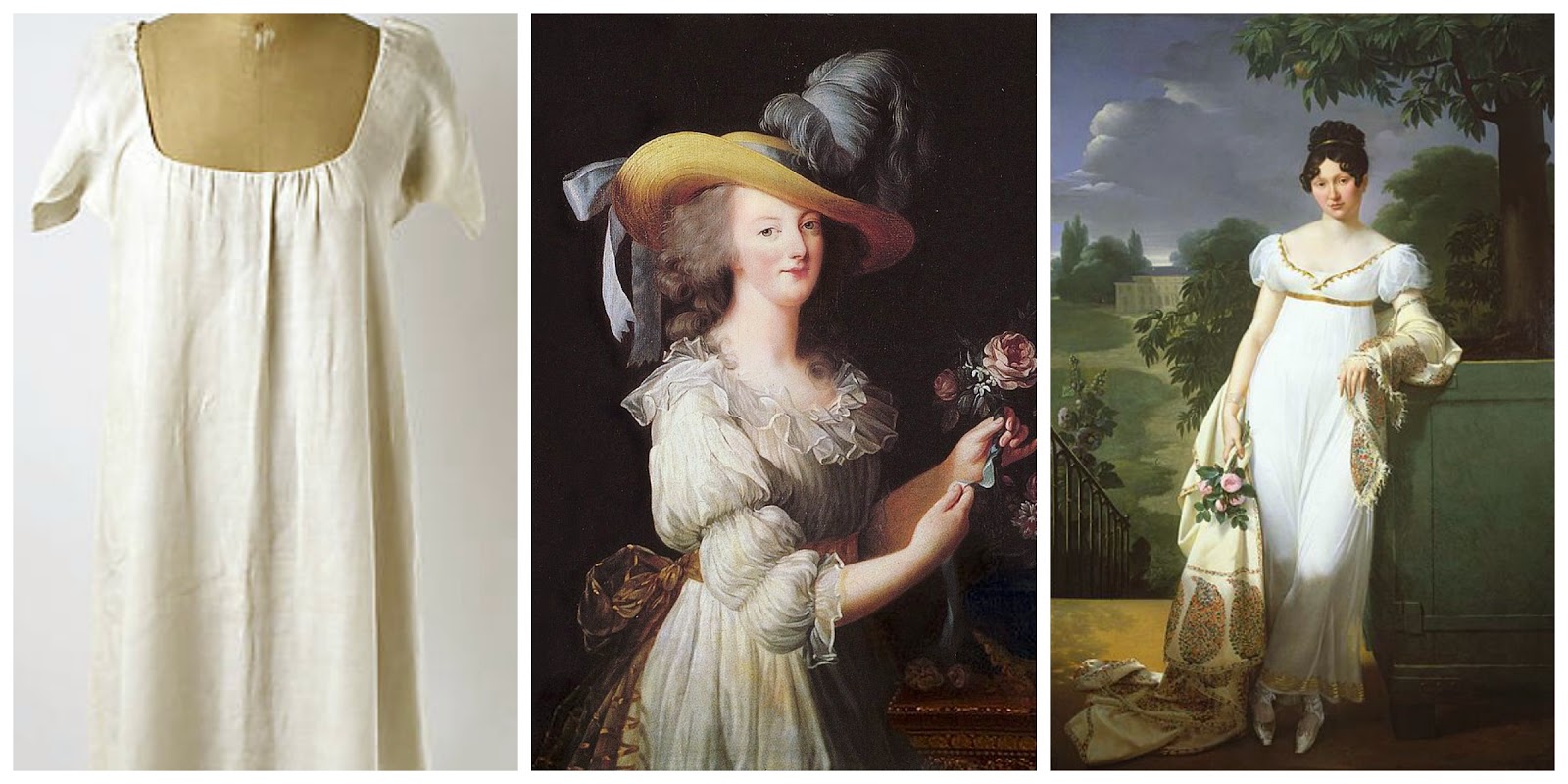 The end of the eighteenth century saw a Neoclassical revival in art and fashion, and women turned to tunic-shaped dresses (as seen on women painted on Greek and Roman pottery) that were fitted at the bust and fell straight with no waist constriction. The style was popularized by Empress Josephine, so the English began to call this an "empire silhouette." In the Regency period in England (first decades of the nineteenth century--think Jane Austen) this style of dress was often made of white or light-colored fabric, which denoted a higher economic class as only ladies of leisure could keep a white dress clean. As fashion is always changing, this silhouette fell out of style for about 100 years...but in the 1920s, enter the flapper. The long, straight dress with very little waist definition (and less restrictive undergarments--good-bye corsets!) was again en vogue. Not only was this style easy to wear, but it also signified the wider freedoms women began to enjoy, including the right to vote (the 19th Amendment was passed in the U.S. in 1920; New Zealand and Australia were early adopters, passing universal suffrage laws in the late 19th century). 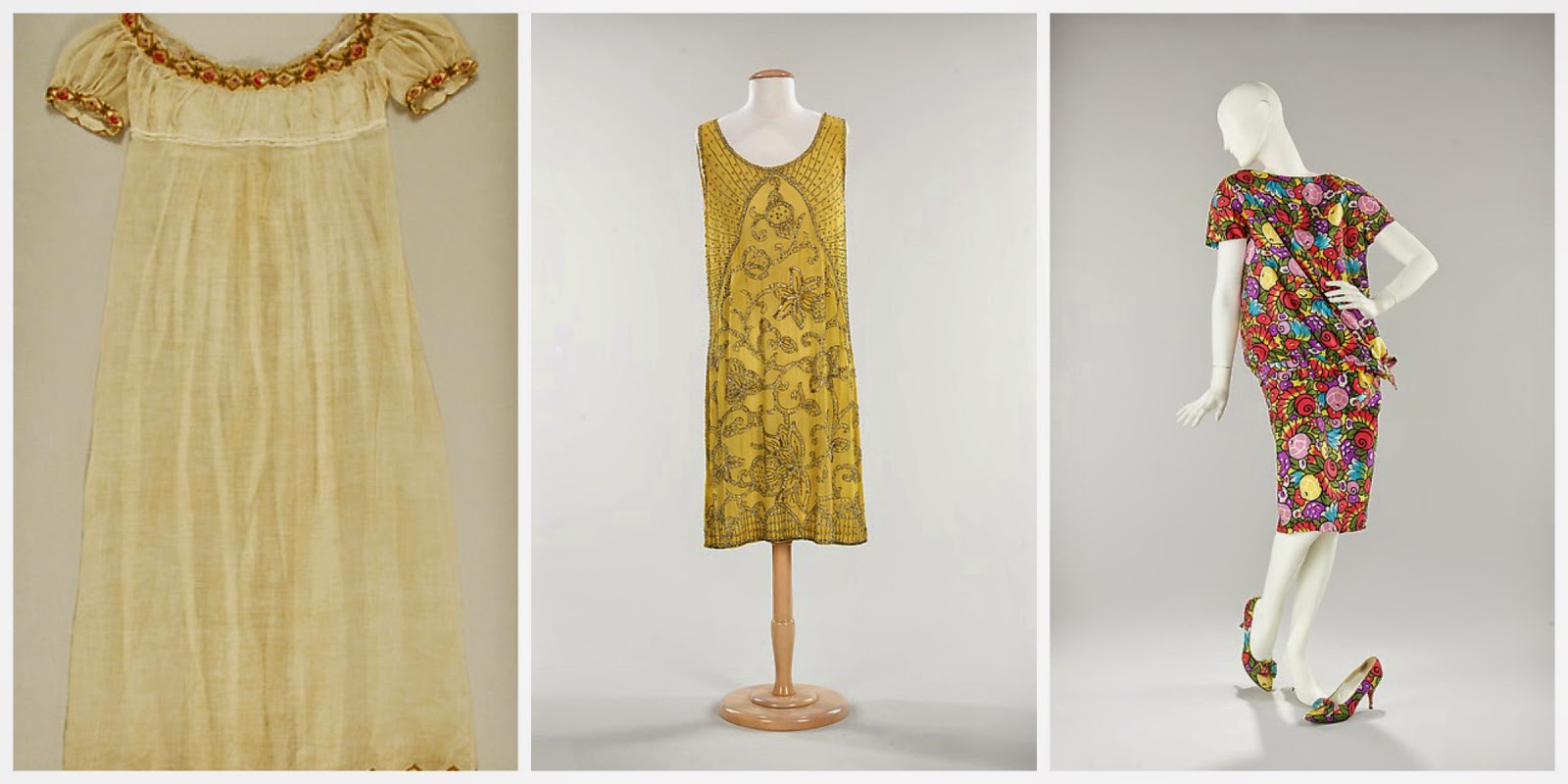 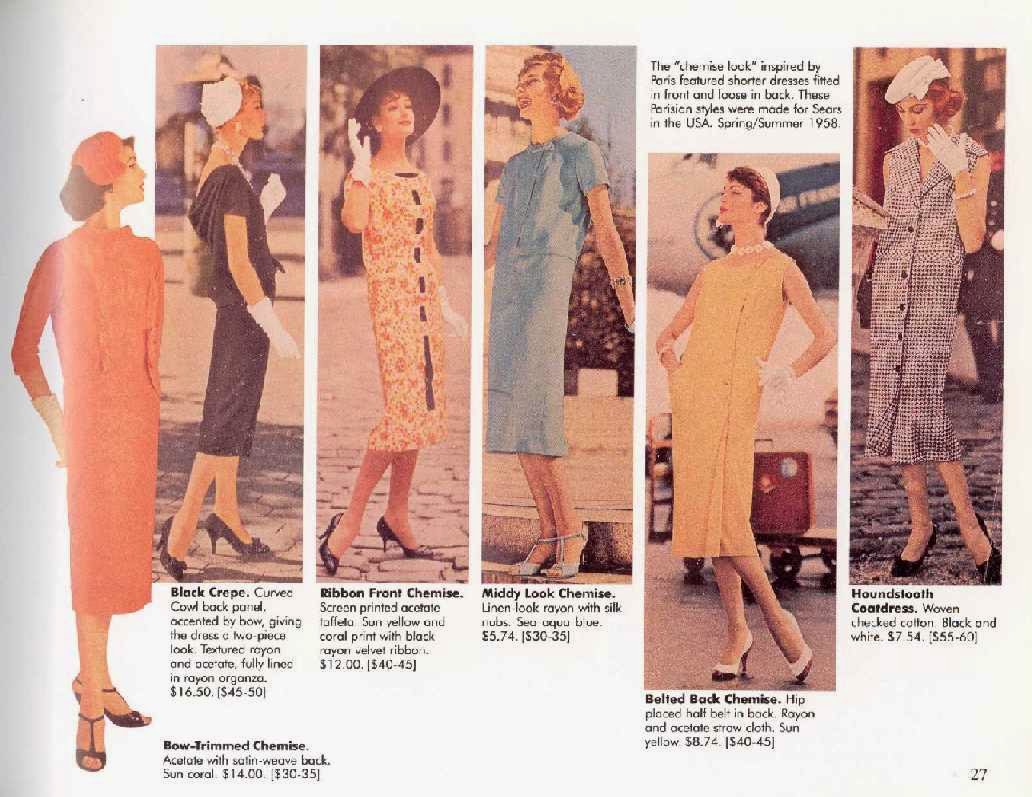 Sack dresses available in a Sears catalog--note that they are called chemises, harking back to the beginning!
Ad from a Sears catalog, late 1950s. From Shih, Joy. Fashionable Clothing from the Sears Catalogs, Late 1950's (Schiffer Publishing, 1997); via plosin.com


As the Depression hit, the flapper lifestyle (and silhouette) faded away. After the privations of World War II, Christian Dior's exuberant New Look (tiny cinched waist--more constricting undergarments here--and enormous full skirts) was a sensation. Because every action has a reaction, designers then created a much simpler silhouette with the "sack dress," which, as its name implies, was a straight garment that hung from the shoulders with very little waist detailing (some of these dresses had a low belted back). Cristóbal Balenciaga is credited with the creation of this style in the late 1950s--the dress above (far right) is a knock-off from Saks. And on from this relaxed shape comes the shift as we know it, a child of the Youthquake and mod sixties. André Courrèges and Mary Quant were at the forefront of the mod shift dress revolution (both are credited with "inventing" the mini-dress). Finally, Lilly Pulitzer popularized the shape (and lovely colorful prints--the simple silhouette lends itself to prints and border prints) for suburban women everywhere; Jackie Kennedy was photographed in a Lilly and the rest was history. Shift dresses have never really gone out of style since the 1960s...they remain popular today, in part due to the variations within such a simple shape and the versatility they afford. 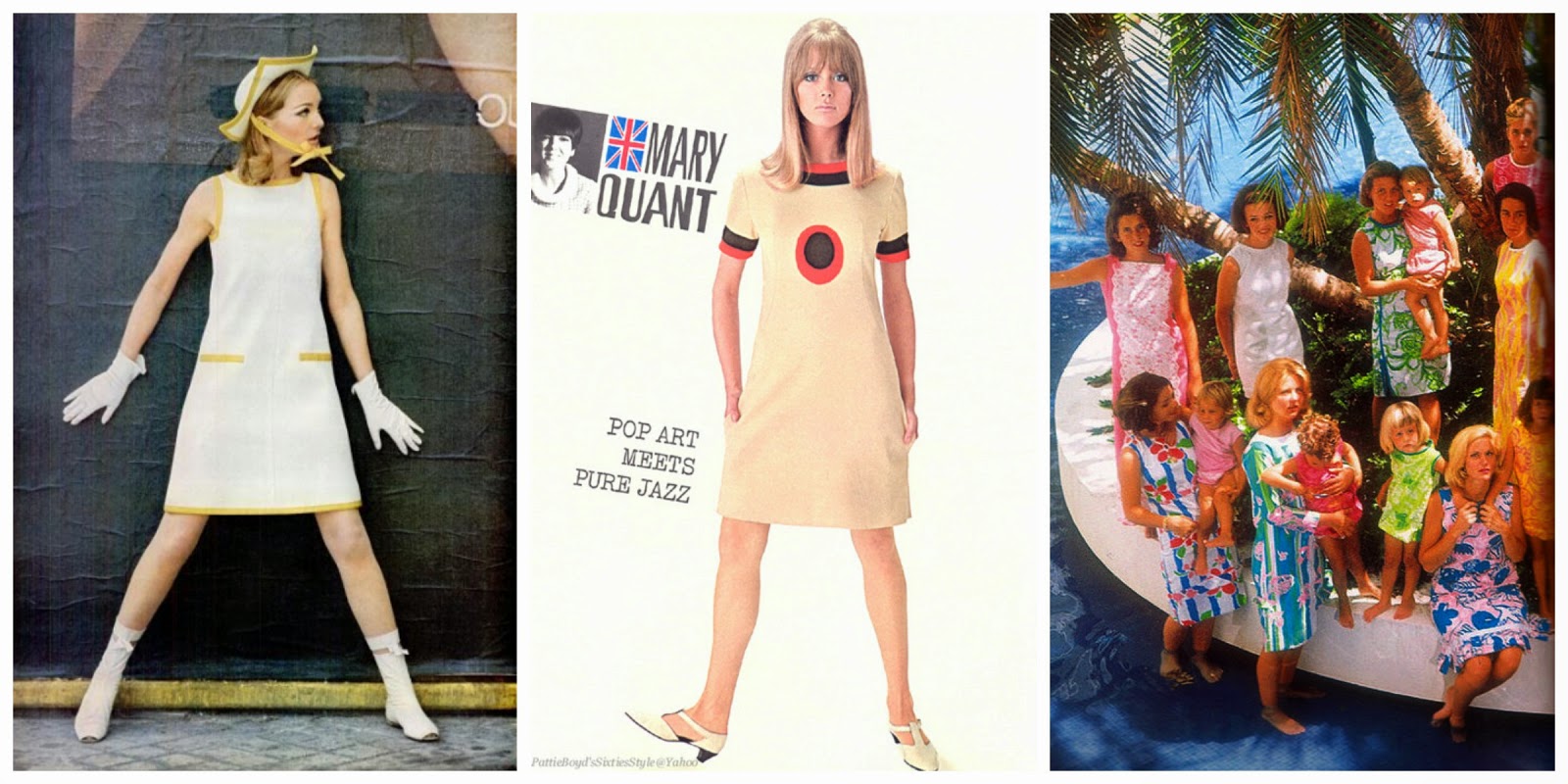 Now, let's take a look at some lovely shift patterns from members of the Pattern Patter team on Etsy! 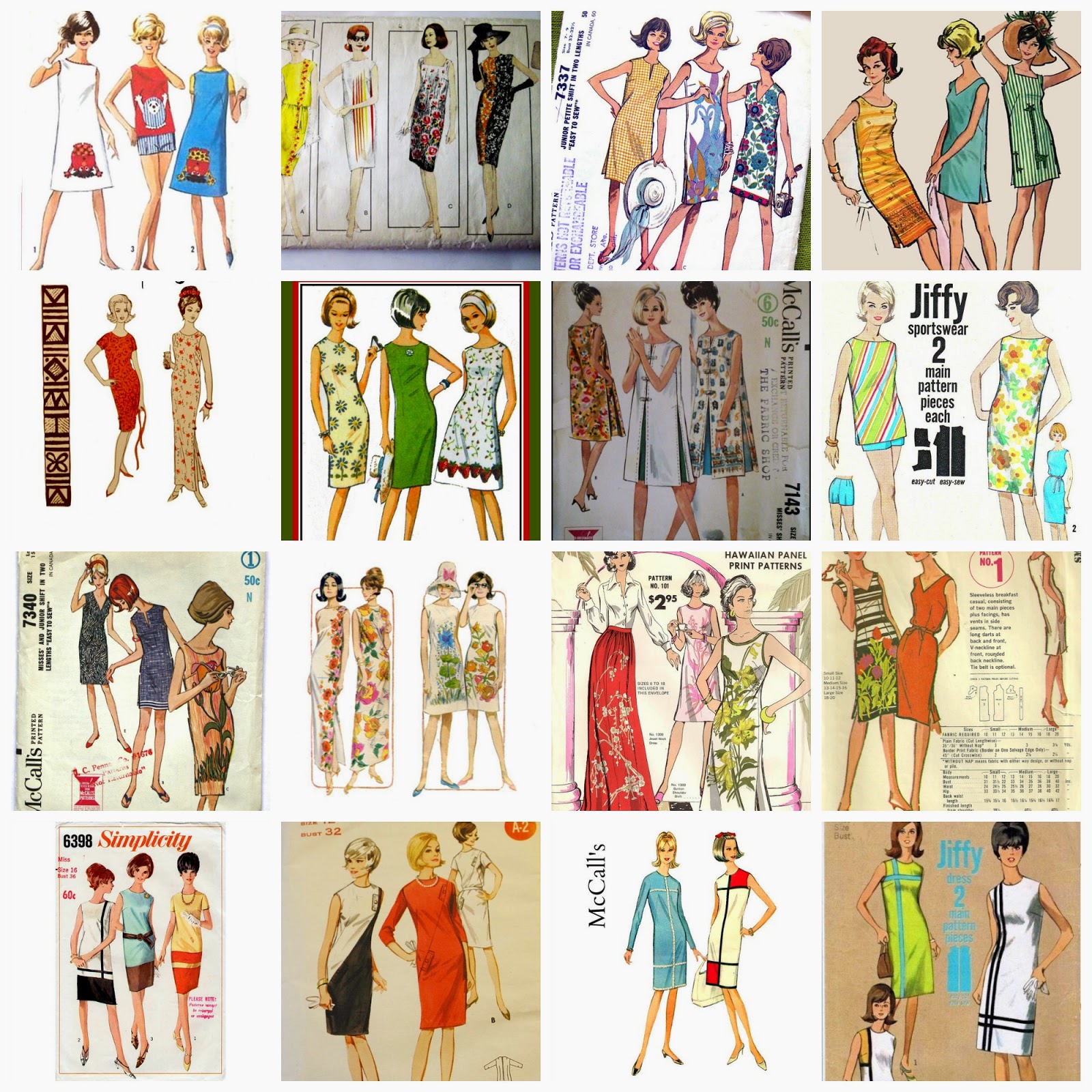 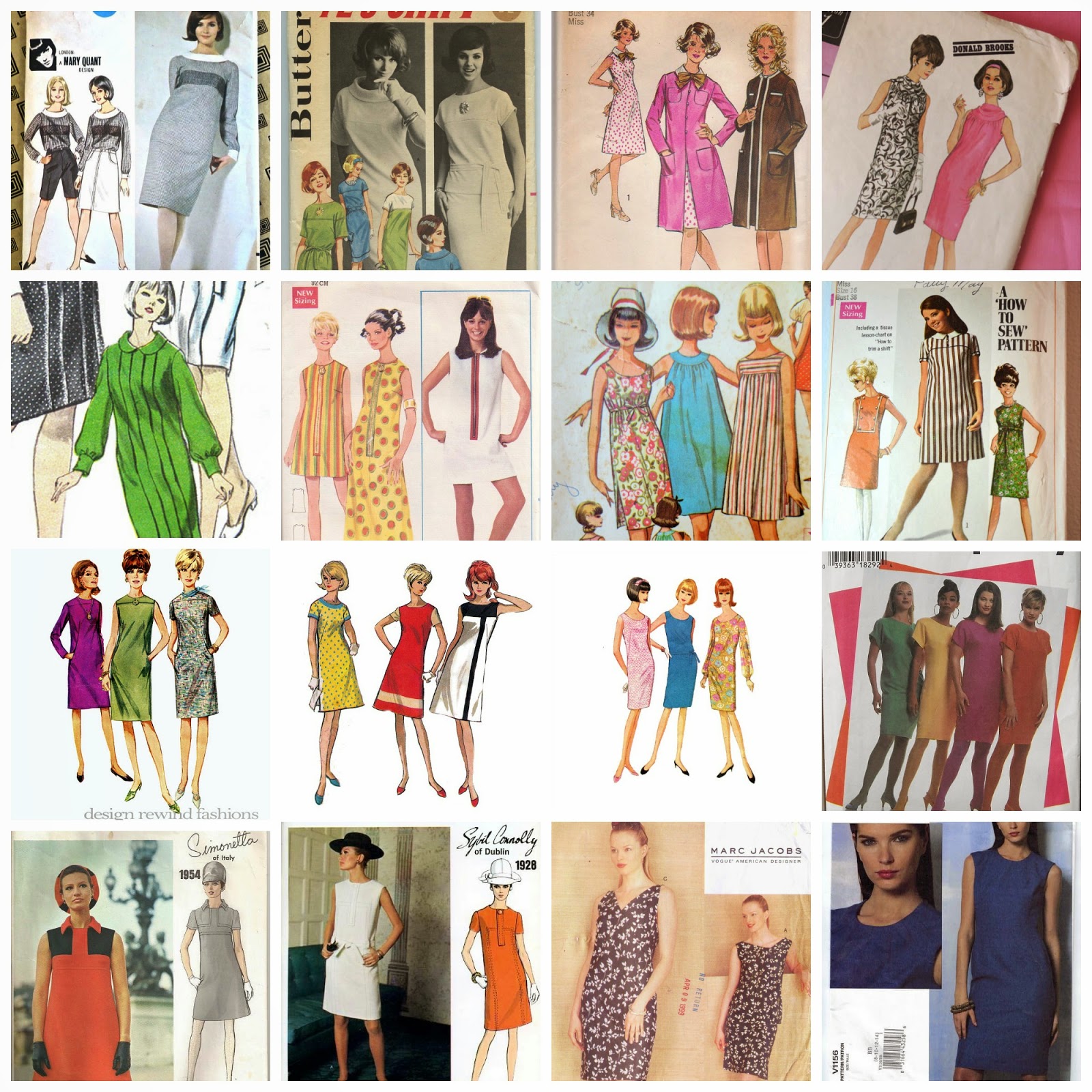 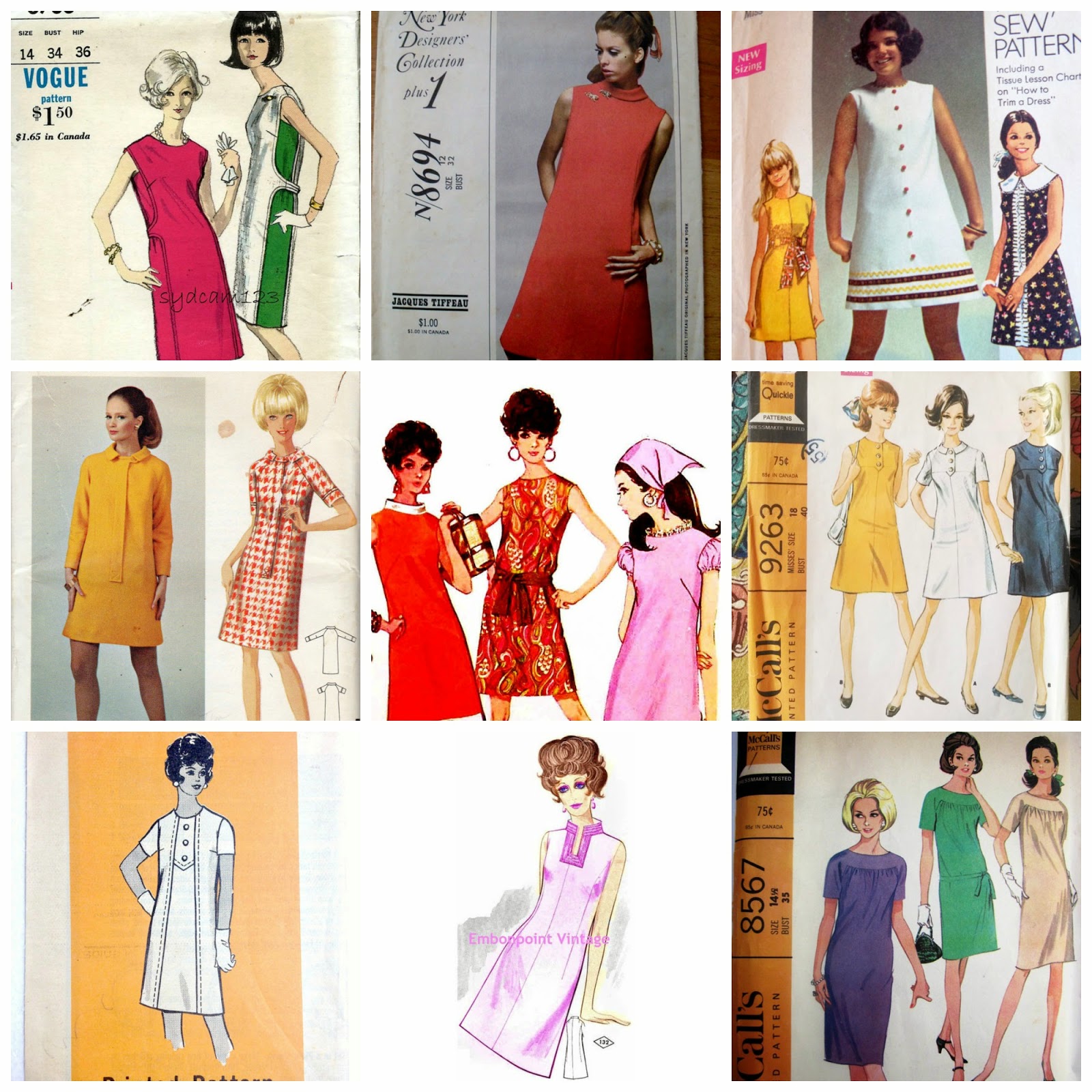 Shifts are so fab because they're very forgiving of any figure flaws AND they can easily transition from season to season: in the summer, all you need are some cute sandals and a shawl; in the fall, some tights and a sweater and you're on your way.

Which frock pattern would YOU shift for? Tell us in the comments!

This is a great first pattern to teach sewing. Just 2 straight seams and a snap to hand sew. The pattern template is simple to duplicate and resize.
Enjoy! Download the pattern HERE


These would make great party favors, bridesmaid gifts, school projects, etc. Make them as stocking stuffers for the holidays!


The Pattern Patter Team wants to congratulate  Carol S. #321 for winning the 1940's sewing giveaway! We hope you all enjoyed entering and hope you will continue to follow us! We have a 1950's giveaway coming up on October 12th!
Here's a sneak peek!
Stay tuned for the giveaway with more patterns, fabrics, and notions!

These adjustable slippers are to be made of felt and stitched with perle cotton or woolen yarn. The dog’s head may be embroidered in six-strand cotton or it may be painted. There are 3 sizes given, 5, 8, and 11; each size adjusts to one size smaller or larger.

I hope you enjoy these great slippers! Get adventurous and resize the pattern to fit the whole family. (I’m sure everyone will be thrilled) – Don’t want a puppy dog? Create your own style! Santa Slippers for Christmas, Bunnies for Easter, Jack O’ Lanterns for Halloween, and even a Turkey for Thanksgiving! If your child has a favorite character – create a slipper that features the character!