How To Keep Clean Vintage Style

It may not be glamorous, but an Apron is essential for keeping me clean while cooking (or sewing)! This one is a McCall's Sample Butcher Apron with no number and it wraps all the way around me for full coverage! You can read more about my creation process here, or you can keep reading for more vintage lovelies!


Finally to end our McCall's Apron Roundup my personal favorite! His and hers!

Romper? Sunsuit? Playsuit? No matter what name you give it, this fun and sassy garment has been in fashion, in one form or another, since the 1930s. The form they take has changed, of course, but the idea is the same: a garment--or a multi-piece outfit--that enables the wearer to move easily, often with a strategic amount of skin exposed. Sometimes these were one piece, sometimes a pair of shorts with a top and/or jacket and/or removable skirt. (We'll explore jumpsuits, those with full legs, in another post.)

I can't really find anything definitive online that makes a clear demarcation between the words "playsuit," "sunsuit," or "romper," although in my own mind "romper" indicates a one-piece garment while "sunsuit" I have mostly seen associated with children's garments. So "playsuit" seems to cover the gamut: one-piece garments, flirty full shorts with halter tops, one-shoulder, swimsuit-styled pieces with a button-on, button-off skirt, and more. All of them are lovely!

One-piece, easily removed garments first appeared for babies and toddlers around the turn of the twentieth century--interestingly, they were first intended for little boys. From the Victorian period until the 1930s, children generally dressed as little adults, so these garments allowed freedom of movement for little ones as they played outdoors; they were generally made from cotton, too, so they were easily laundered in a period when laundry was often an all-day affair (ugh).

As women's clothing became less restrictive in the 1920s--good-bye, corsets!--and with the advent of more leisure time activities such as tennis and golf becoming popular, these not-quite-swimsuits appeared, made popular by Hollywood starlets beginning in the 1930s. Think Lana Turner in The Postman Always Rings Twice, or any number of publicity shots of ingenues (click here to see a panoply of lovely ladies in divine playsuits). 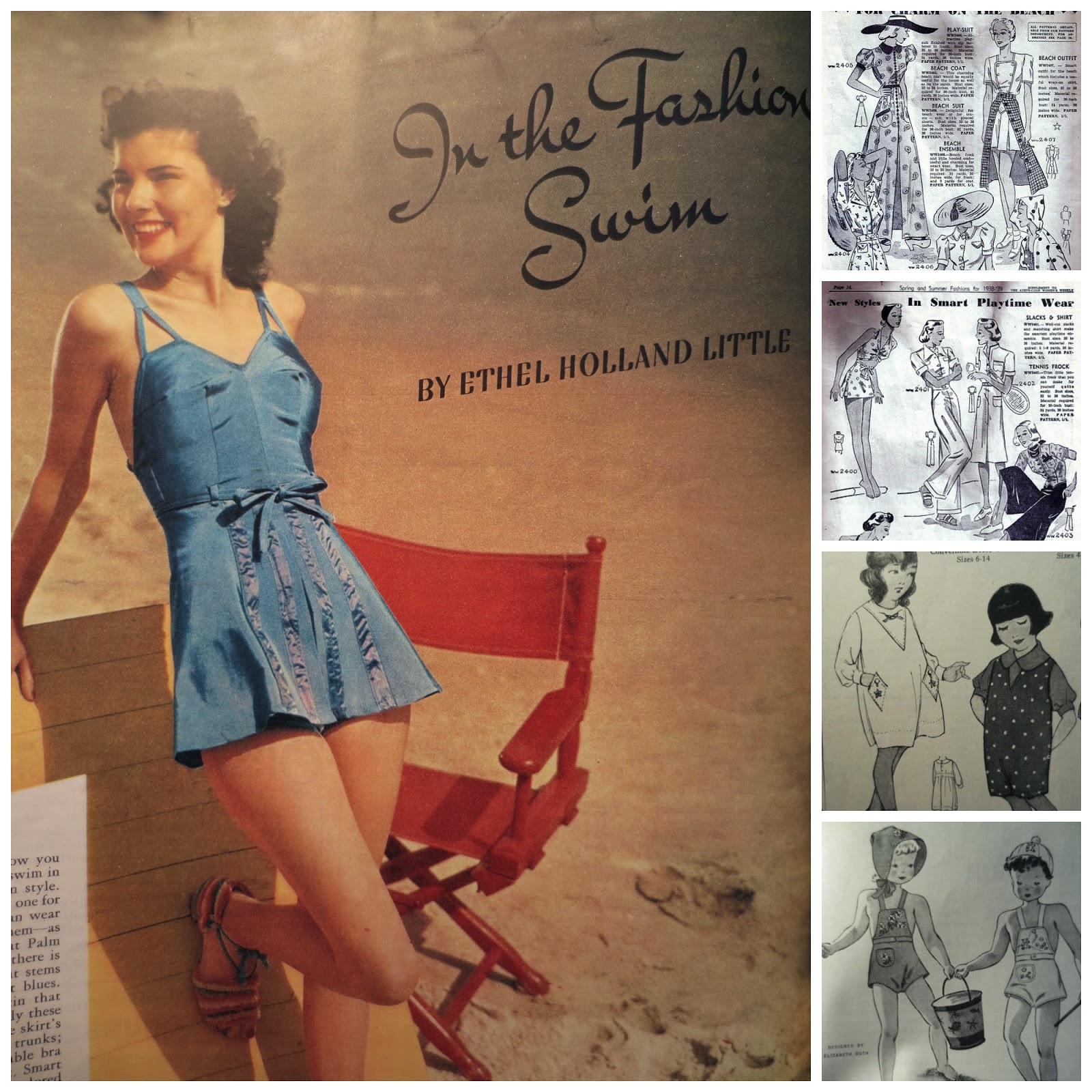 (Images are all from magazines in my own collection.)

These playsuits are generally made out of the same materials as other clothing--cotton, rayon, etc. It's interesting to note that swimsuits (referring now to the garments we more or less recognize as such, which began to appear in the 1930s for the general public) were made from ribbed knitted wool, pioneered by the Portland Knitting Company; this company evolved into Jantzen, named after one of its founders. Wool, however, is quite heavy when saturated--sometimes these suits weighed more than 8 pounds when wet. Man-made fibers were rapidly developed during the 1940s that allowed for lighter-weight, stretchier fabric--but that's for another post!

Technically, some of the patterns shown below MIGHT be swimsuits, but the boundaries definitely blur...whether one piece, two, with skirt or without, one shoulder or halter...they are all lovely!

Now, let's look at some playsuit/romper/sunsuit goodness from members of the Pattern Patter team, shall we?

(As always, clicking on the image will enlarge it.) 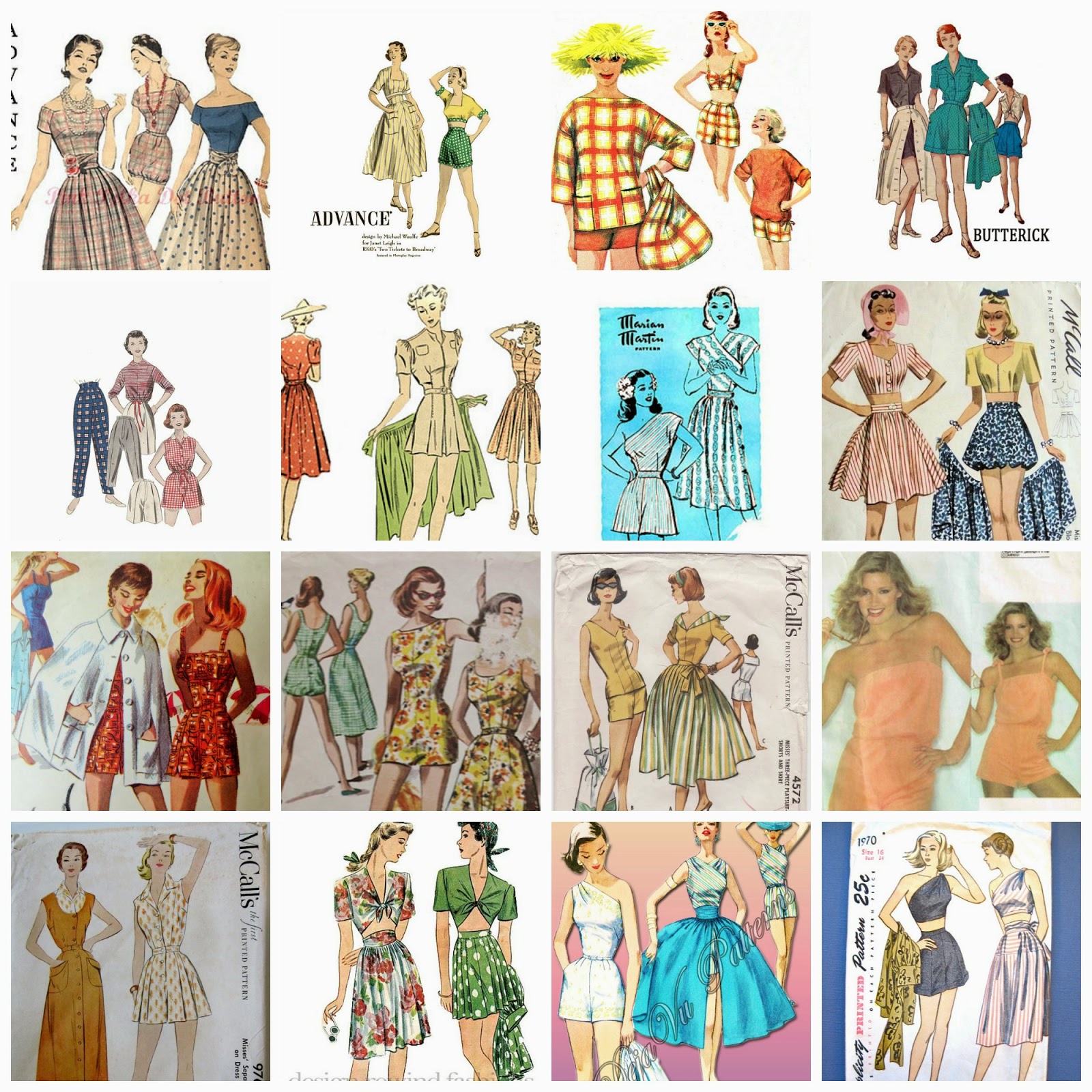 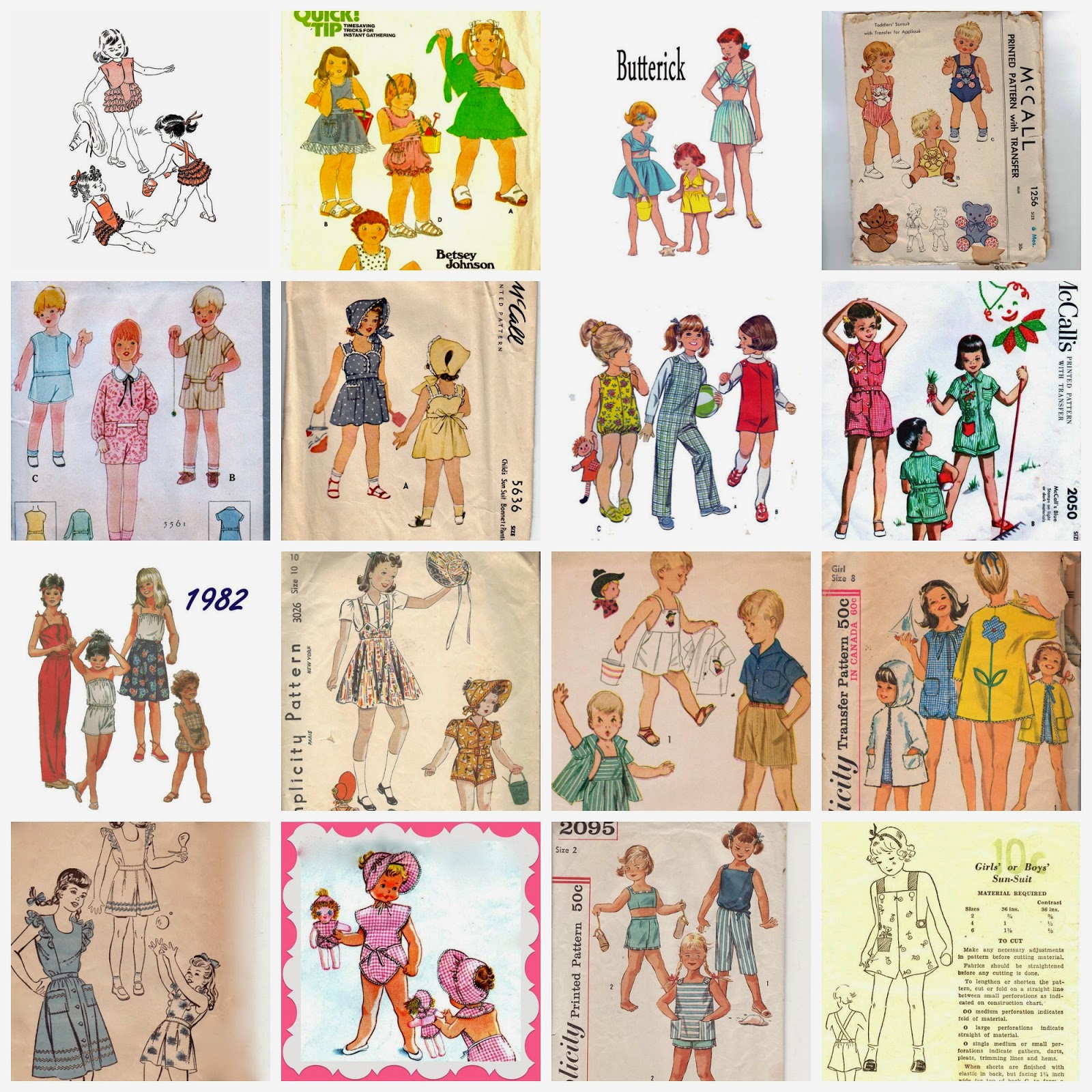 And finally, I leave you with this: 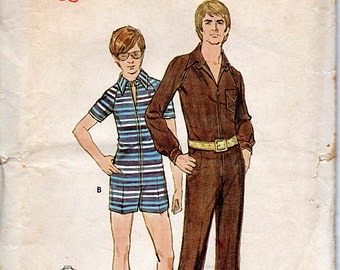 Perhaps there is a reason there is a dearth of men's "playsuits"? (There actually were cabana outfits--matching shirts and swim trunks...but one-piece suits are scarce...)

Which playsuit/romper/sunsuit would YOU don for a day in the sun? Tell us in the comments!
Posted by sherri s. at 9:51 AM 15 comments: 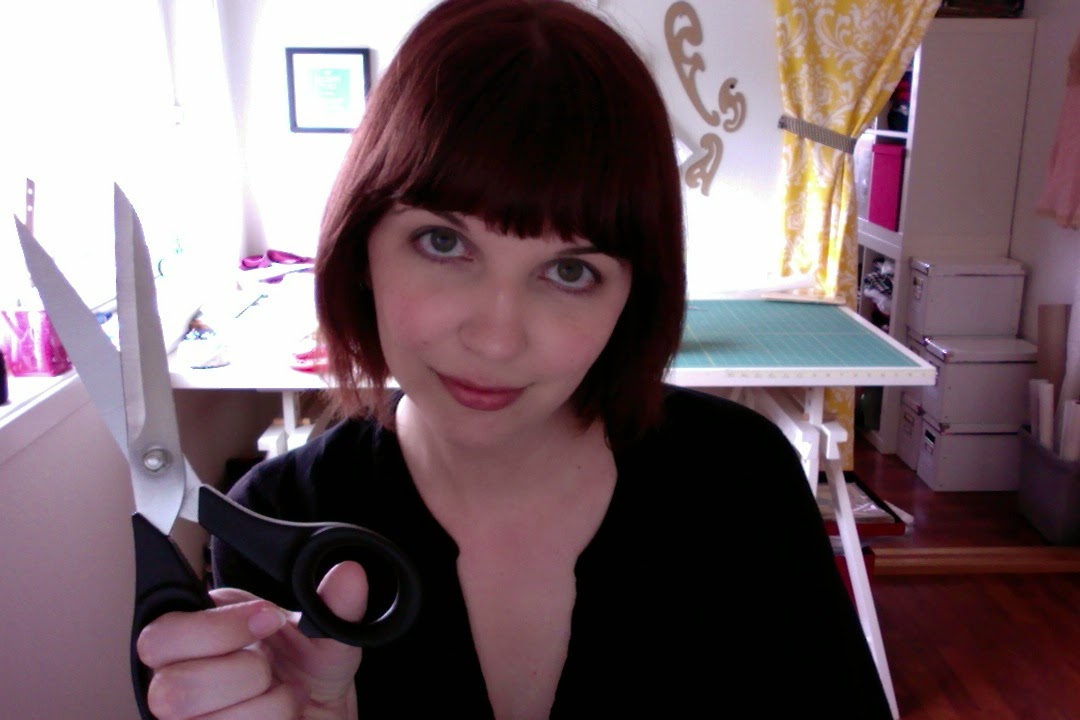 Working in My Studio


Hi, My Name is Anna I live in Seaside, CA. My husband is in the Air Force so this changes every few years. I stumbled into pattern selling/ design quite by accident. It started as a bit of a hobby to entertain me when the Air Force shipped my husband and me to icy Norway for 4 years. I couldn't find work there - a French degree being as useless as you could imagine in a Nordic country - and so spent hours and hours playing in my sewing

room. To help me stay busy, my dear late Mama sent me care packages full of vintage patterns and fabrics from her antique shop. It kept me sane, and inspired. My mother owned an Antique Shop when I was a child. I've been selling vintage since I was about 12, using my allowance to buy great vintage things and sell them in my Mama's antique shop. I opened my shop on Etsy 4 years ago. 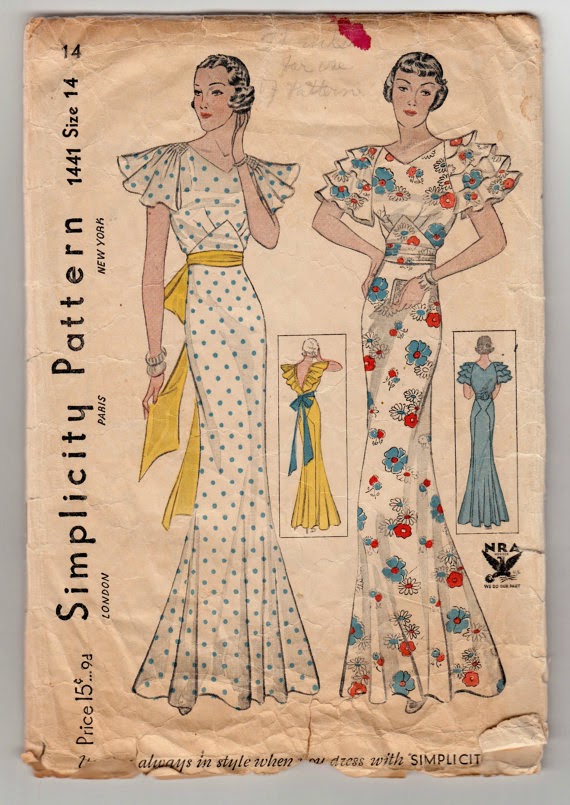 
After a year or two, my growing collection of vintage sewing patterns reached a critical mass and I opened my shop MrsDepewVintage on Etsy to thin it out a bit.. That was successful enough but what I heard most often from customers was the regret that there weren't many options for reproductions. (I know we've all gotten that email from a customer - asking if by any chance we made a copy of that great pattern that just sold). Not wanting to step on any copyrighted toes, I designed my first sewing pattern - a 1950's inspired beach bra top. It was such a success as an instant download (Burda patterns being the only instant download pattern source at the time) that I just kept going from there! I started doing my research and then started offering a few reproductions not long after. The vintage patterns in my shop sell just as well as my vintage inspired patterns and many customers are happy to find both in one place. 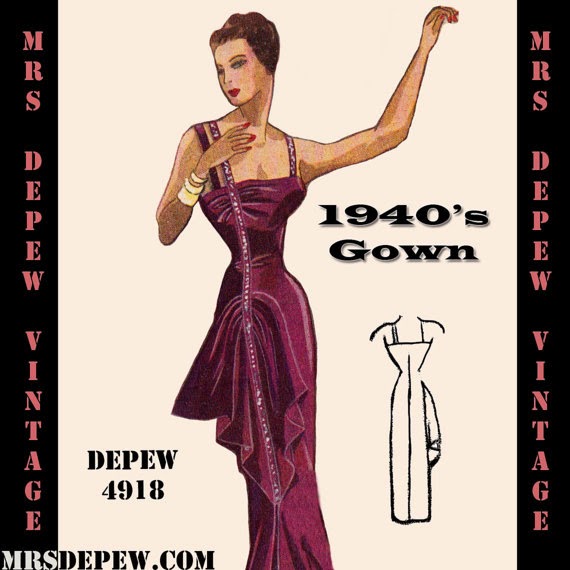 Being a PDF seller is a bit harder than it sounds, that is, if you want to do it right. I think one of the things that sets me apart (from some, not from all) is that I do extensive research into the copyright/ public domain status of all of my pattern/ e-books. In many cases where the copyright waters have been murkier, I have acquired permissions to use those items. What might surprise readers the most is that I'm not in it for the money. My husband and I live simply and don't need much so I'm not in a mad dash to produce as many PDF's as possible. My major motivation for these items has more to do with growing up in an antique shop. I saw so many beautiful items over the years destroyed by people who didn't know any better, or by time despite the best efforts of collectors. More than anything, I want these beautiful sewing patterns and rare booklets to survive and to be loved by new generations who appreciate the art of hand-made. (I can remember one pattern in particular, rare and beautiful, literally disintegrating

in my hands as tried to unfold it, and breaking down into tears like a crazy person because I was sure that might have been the only one of it's kind left). I'm passionate about protecting these treasures and am so glad every day that I get to do this as my day job!

You can find me here too:

Please feel free to use the following coupon code for 15% off any order from our Etsy shop!
PATTERBLOG

Can These Patterns Be Any More Awkward?

Here's to a new month and a friendly reminder to always check our pattern placement! Thanks to Lynda from All the Precious Things for providing these gems!