Trixie the Donkey
Courtesy of RetroMonkeys


For this week's Free Pattern, I decided since it's the official kick-off of the holiday shopping season, that I would post a toy pattern. This is one of my favorites. I named her Trixie - she needs a bow. She is made of felt with contrasting stitches and twisted tail. She measures 11 1/4 inches high and 6 1/2 inches long. She's an easy to make little toy. She can be made to be a boy donkey too!


What will you name yours?

Skirt Styles Over the Decades

SKIRTS - Which is right for You?

A couple of months ago when I was in the middle of my five part series on necklines, some readers expressed an interest in learning more about the different styles of skirts. Sherri from SewBettyandDot did an article on skirts. To read, CLICK HERE.

Well, here is the first insttallment of two.

The A-Line Skirt is a wardrobe essential. A simple modified triangle. Barely modified - the top cut  off and the base slightly curved. It can be made in any length from Micro-Mini to Evening length.

The Broomstick
The traditional broomstick skirt is tiered and has vertical creases or wrinkles. It has several names - Gypsy, hippie, peasant, bohemian, or tiered. They can be made out of gauze and twisted around a broomstick to create the wrinkles.

The bubble skirt is a full skirt that is gathered inward and upward at the hemline.

Everyone loves  a circle skirt! A great style for every body type. It is what it's name more than implies! It is a circle with a waistband. It served as the iconic 1950's poodle skirt and is still a popular and versitle style for today's wardrobe!

The dirndl originated in Austria. It was called Dirndlgewand which means maid dress. Dirndl was originally the entire outfit. Skirt, Blouse,bodice (vest), and the apron. Modern use of the term apples to the circular skirt with gathers usually concentrated at the center front. Below are some examples of the variations and wide range that is the Dirndl!

Embellishments Can Make the Dress

by Sherri, Sew Betty and Dot

Now that winter is truly upon us, I bet most of us have reached for a coat. What kind of coat are you wearing this year? Duffle, trench, or princess? Reefer, chesterfield, or polo? Loden? Redingote? Trimmer or cocoon? Swagger or clutch? (Or just a plain ol' coat?) These are all styles of outerwear that have been popular since the turn of the twentieth century. In this post, I have focused on long coats--those that come to the knee or below; shorter coats, or jackets, will be discussed in another post.

Coats, specifically "overcoats," are relatively new garments for women; due to the wide skirts that were the fashion up until the turn of the twentieth century, many women wore capes, cloaks, or shawls for warmth (there were exceptions, of course--the pelisse was a long-sleeved outer garment that echoed the lines of ladies' dresses before, during, and after the Regency period).

In the 1920s, coats became fashion statements as much as protective garments against the elements. The straight lines of twenties frocks were covered with cocoon coats, somewhat shapeless garments that swaddled the body; these often had fur cuffs and fur collars. In the thirties, more styles of coats emerged: double-breasted coats that buttoned, including the collegiate-style coat, Hollywood, and reefer coat; the polo coat, a double-breasted wrap coat ; princess coats had, well, princess seams that created a slim silhouette on top with a more flared "skirt" on the bottom half; swagger coats are very full coats, shaped like an inverted "V," usually with raglan sleeves. (By the way, a Chesterfield coat--originally an man's style--is a double-breasted coat with high peaked collars, somewhat flared, with a velvet collar.) 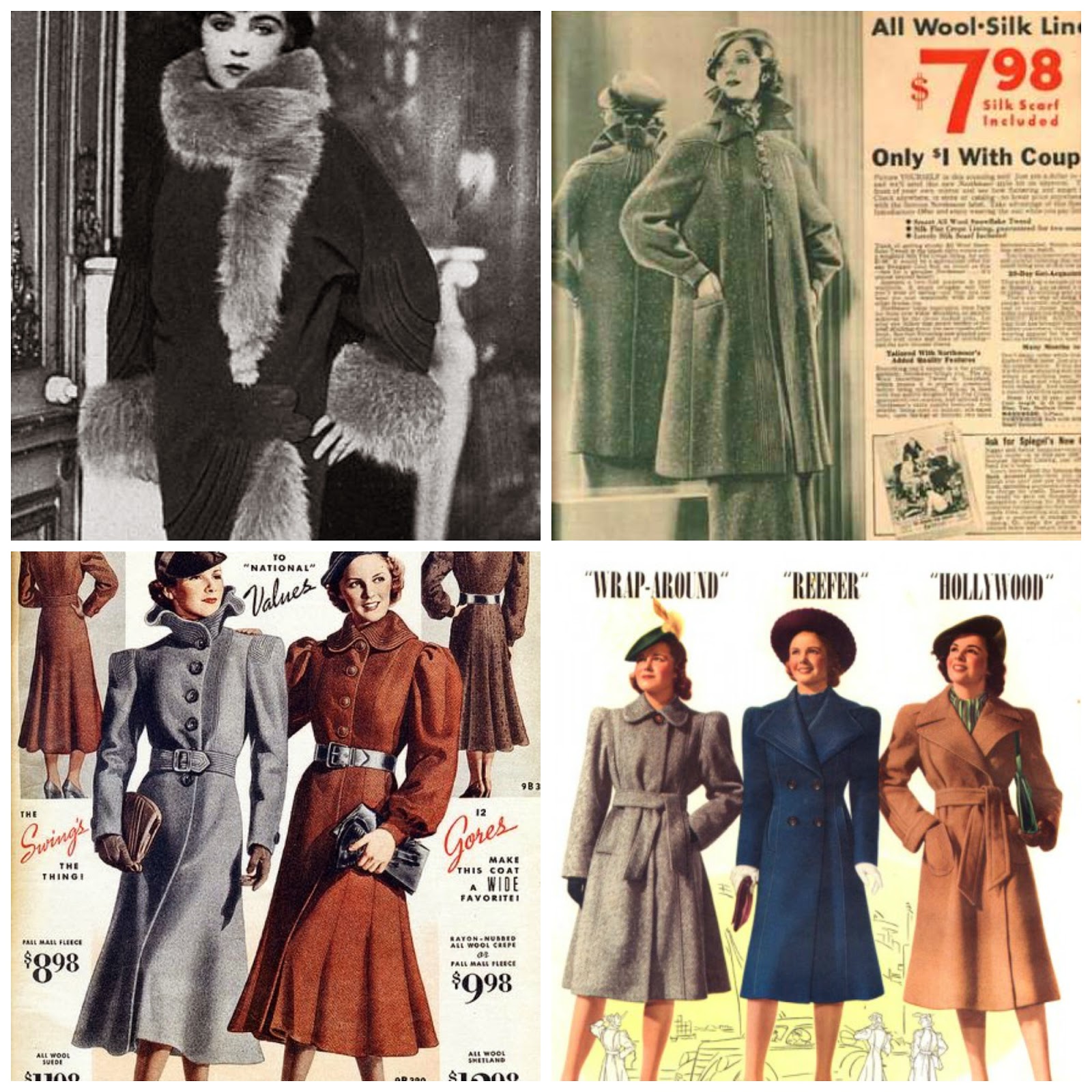 In 1942, as fabric became more scarce due to wartime restrictions, the United States War Production Board implemented L-85, which forbade things such as unnecessary pleating, turned-back cuffs, overly large collars, etc., and coats became much simpler and boxier for a time. After the war, the New Look (nipped-in waist, very full skirt) could also be seen in outerwear (princess coats again). Coats with very full silhouettes and bell sleeves, sometimes called swing coats, were popular (partially due to the postwar baby boom: a full coat was comfortable for a pregnant woman--no belts!). And clutch coats--that wildly impractical garment with no fasteners--were stylish throughout much of the 1950s. And of course, in the 1960s, anything went: women wore men's coats, short swingy coats were made to cover short minis, ethnic influences could be seen (East Asian embroidery, Russian steppe dwellers, poncho shapes)--and of course, there was the maxi coat.

In the 1970s, maxi coats and trench coats were often seen, with wrap coats becoming very popular (short jackets and longer coats). Duffle coats (wool coats fastened with toggles), pea coats--anyone else here buy those sorts of coats at the Salvation Army? I did!--loden coats...the seventies fashionista could take her pick. As always, fashion recycles itself...in the 1980s and 1990s, some version of almost all of these styles could be had.

Now let's take a look at some lovely coat patterns from members of the Pattern Patter team. 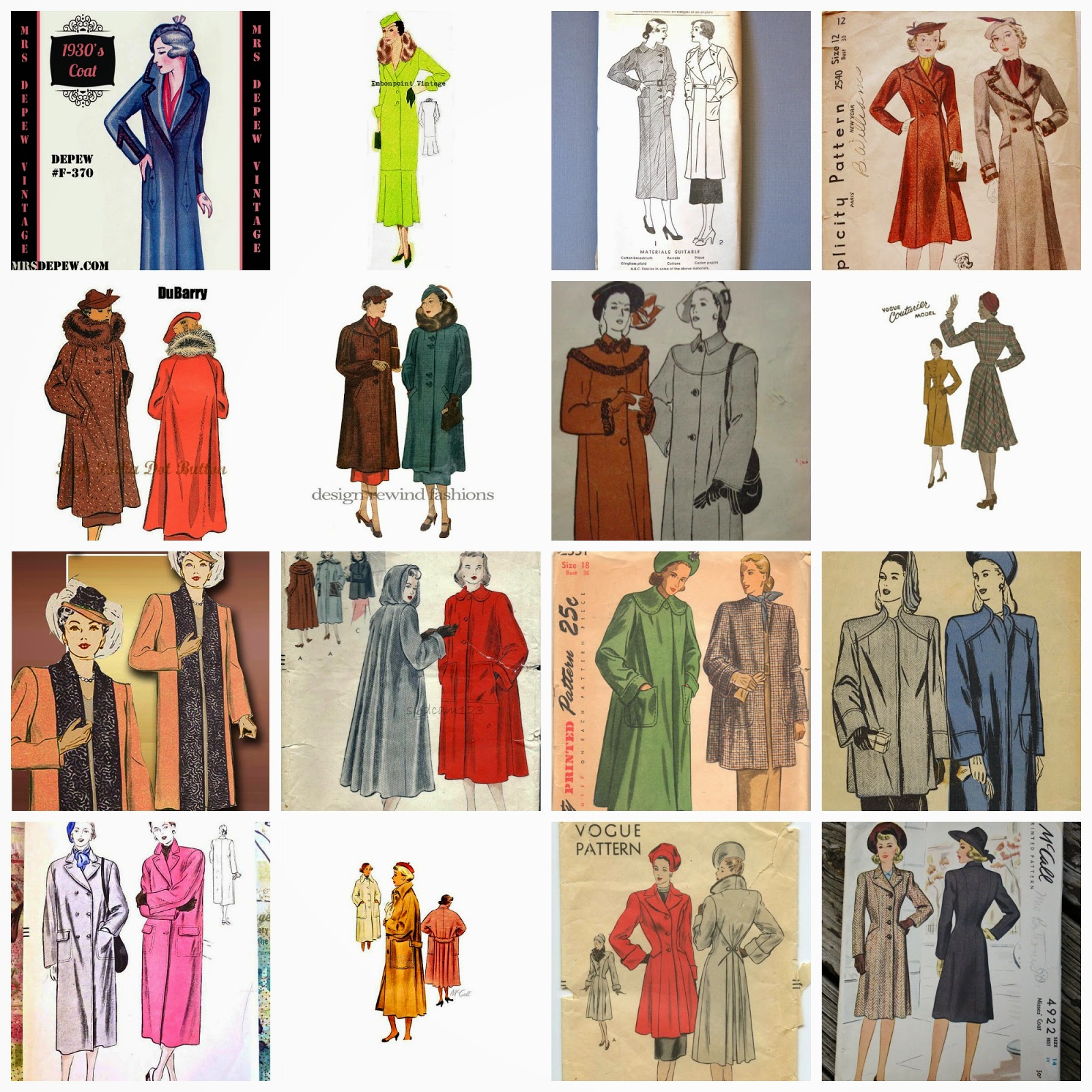 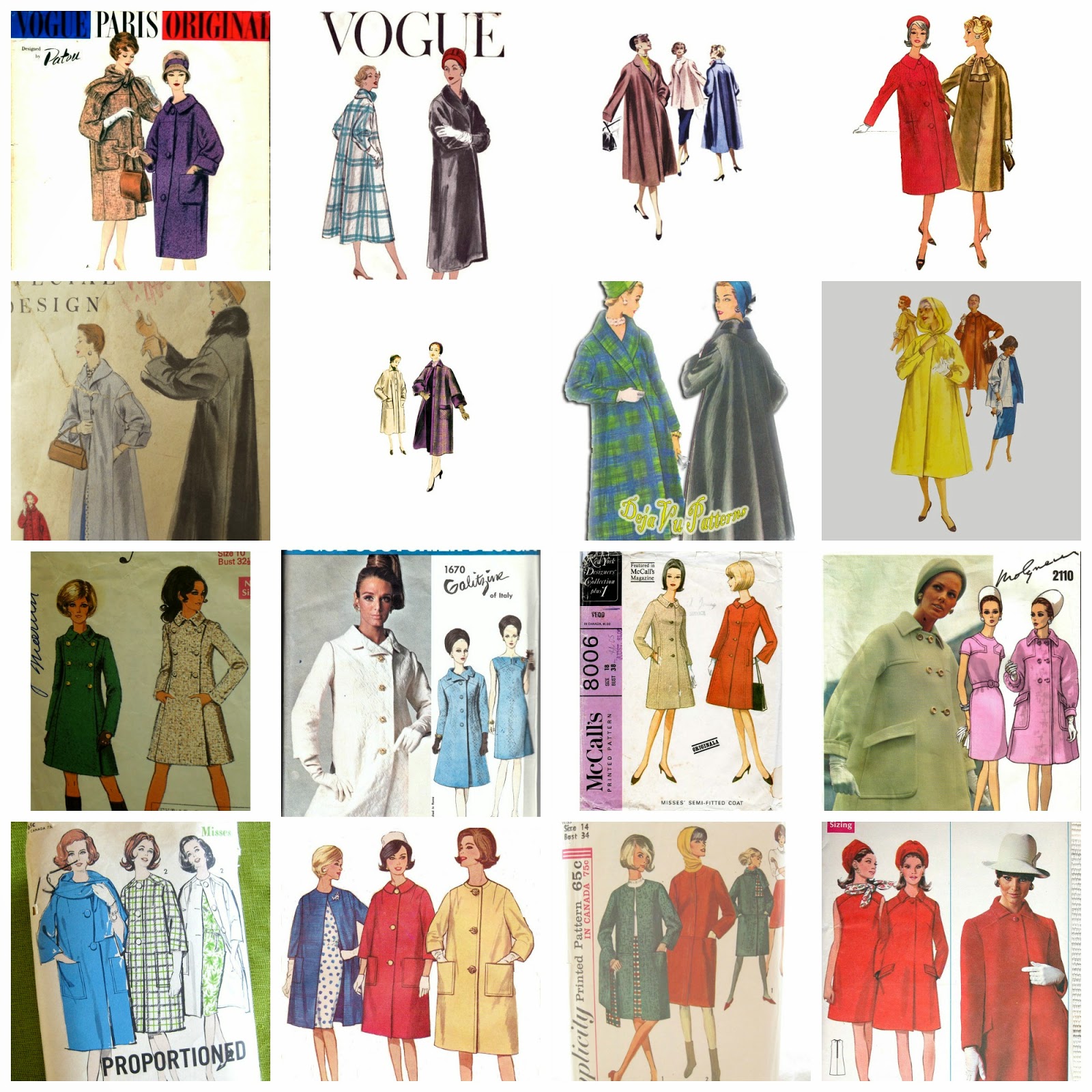 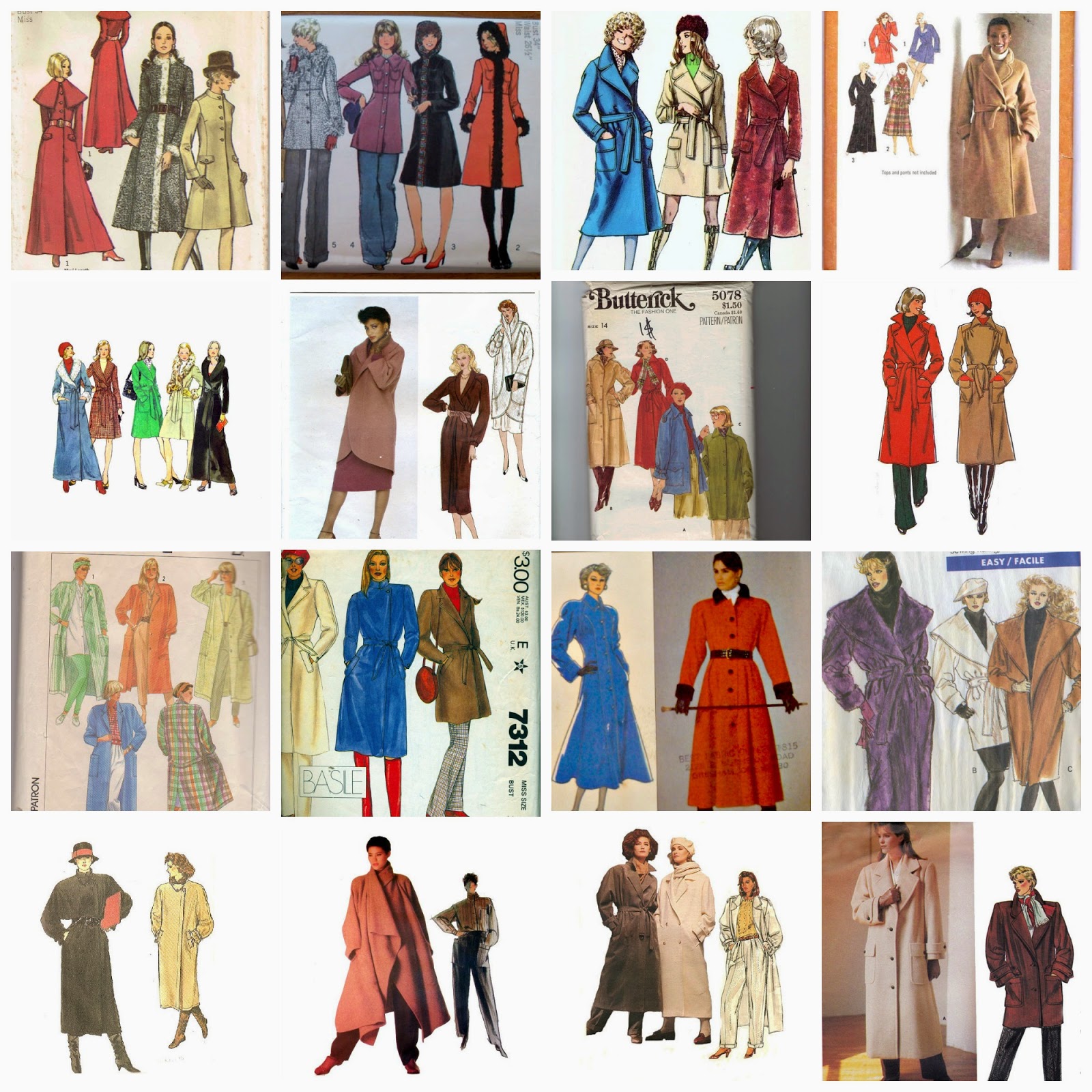 Which one of these coats would YOU like to wrap yourself in? Tell us in the comments!
Posted by sherri s. at 11:56 PM 11 comments:

Sarah and her family lost everything a couple of years ago. Winning this will help the family make some new memories!

It's that time again for the Pattern Patter Team to host our annual Black Friday Blitz!

Join us on Black Friday, Small Business Saturday, Sunday, and Cyber Monday for some great new listings and fabulous sales!

CLICK HERE STARTING BLACK FRIDAY TO SEE ALL OF THE NEW LISTINGS FROM PARTICIPATING SHOPS!

As of today, 25 shops are signed up to participate! Many shops will be offering great discounts!

Looking for some sewing projects for the holidays?

You are in the right place! The Pattern Patter Team is hosting a great giveaway!

Fabrics to make clothing or decor and some great embroidery transfers too.

You must be a resident of the U.S. and be 18 or older. Past and present members of Pattern Patter Team on Etsy and their families, as well as any previous winners are not eligible to enter.
To Read all of the Giveaway Terms & Conditions, Click on The "Blog Policies" tab.

All entries must be completed by 11:59 PM November 16th. The winner will be notified by email and be announced on the blog November 18th.


THESE BOOTS ARE MADE FOR WALKIN'

If you are missing the 1970's or looking for an affordable pair of boots for this winter, these are for you.

Nancy Sinatra would have  gladly worn these back in her Heyday! 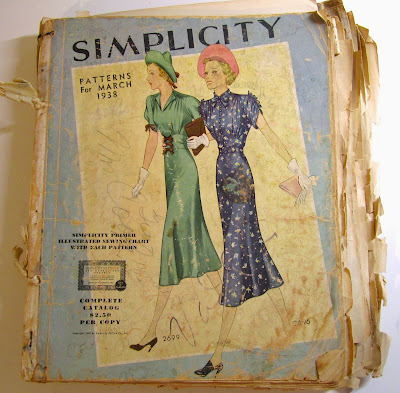 Anna, owner and creator of MrsDepew vintage and reproduction patterns, has been collecting Simplicity S-series patterns. I know that I as well as other members of the Pattern Patter team have been able to help Anna grow her collection of the S-Series. Well, now she has the ultimate resource for dating those patterns! Although it's in shabby condition, the illustrations inside are amazing. 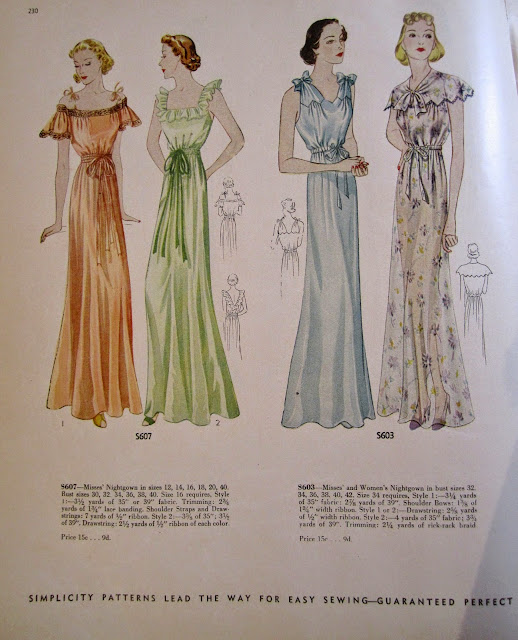 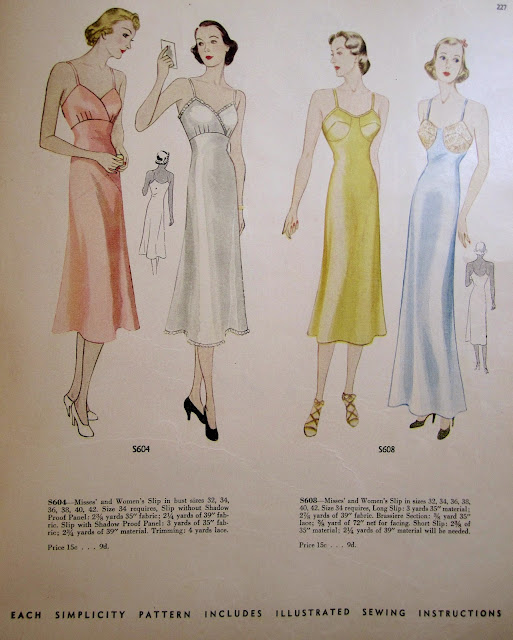 Can you help Anna complete the collection? Whether you can or not, stop by her amazing blog and her shop full of the most beautiful lingerie patterns. 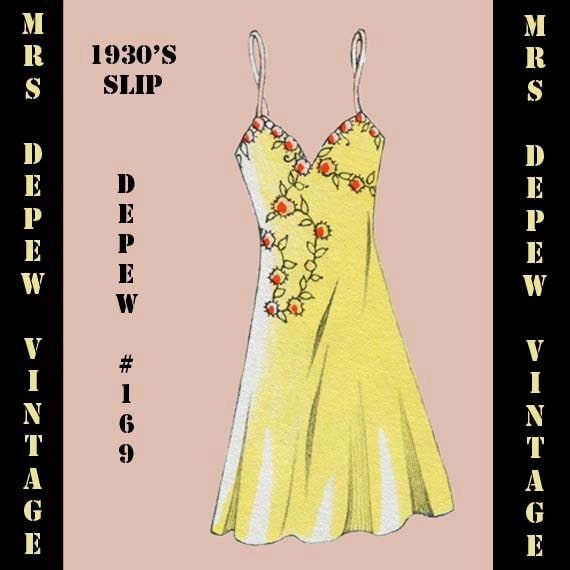 An example of one of her PDF patterns.
CLICK HERE to visit her shop.