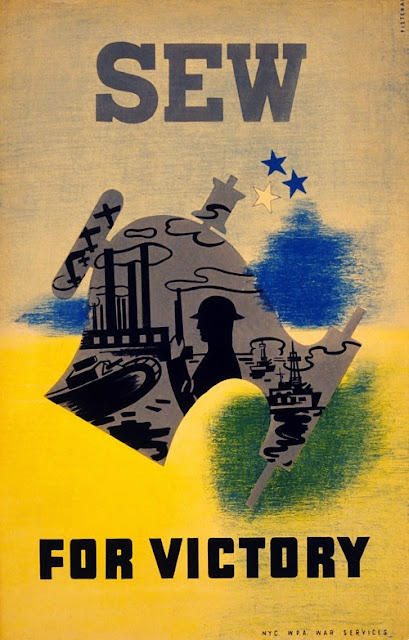 In 1942, the War Production Board, or WPD, implemented Limitation Order L-85 in the United States. Its purpose was to ensure that fabric and materials were ear-marked for military purposes. Included were restrictions on nylon, rubber, silk, leather and wool. It gave specific guidelines and measurements regarding new clothing. Pattern companies were affected, as new patterns issued after L-85 also had to conform to the guidelines.
Below is one section from Limitation Order L-85: Curtailment:

Dresses. No person shall, after the effective date of this Order with respect to such

any cloth for the manufacture of, and no person shall sell, any:

In addition to delineating the length of jackets and dresses, hem circumference, and width of waistbands and cuffs, it also specified the number of buttons (preferably plastic rather then metal) which could be used and the quantity of new leather shoes which could be purchased per year.  Many companies offered non-rationed shoes made of canvas and non-leather material. The wedge shoe and espadrilles became very popular during the war years due to rationing.  The wedge was originally created by Salvatore Ferragamo and used cork for the soles rather than leather.


Dress silhouettes became narrower and skirts shorter to comply with the new restrictions.  The intent was to eliminate waste and to conserve non-military use of fabric, machinery and manpower.  Women were encouraged to re-purpose old clothing and other materials in the making of new.  Feedsacks were popular sources for aprons, dresses, and children's play clothes. Women would trade with one another in order to obtain enough matching sacks to make an item. 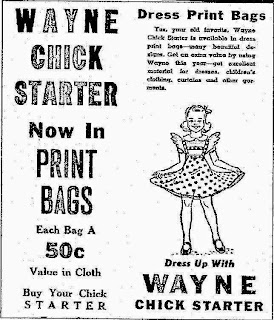 Mending became a patriotic duty.  With their men serving in the military, many women re-made their husband's suits for their own use or to make children's clothing. Out-grown sweaters were unraveled and new items knitted or crocheted from the yarn. Fabric purses replaced leather. 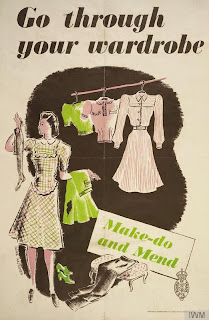 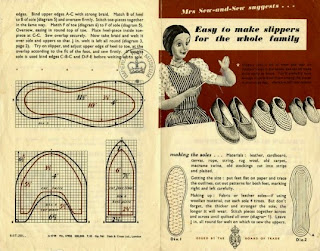 Double-breasted jackets gave way to single breasted for both men and women.  Shoulder pads for women emulated military uniforms.  Other restricted embellishments included pleats, ruffles, attached hoods and shawls, full skirts, and balloon, dolman, or leg-o-mutton sleeves. Women were encouraged to wear neck scarves beneath their suit jackets rather than blouses to save fabric.  Since new metal zippers were unavailable, wrap skirts were introduced.
Women began donning cuff-less pants and working in factories. The width of the pant leg was also restricted by L-85.  Turbans, home crocheted snoods, and scarves were part of this uniform to prevent accidents arising from long hair getting caught in machinery.
Clothing exemptions were allowed in specific instances.  Bridal gowns, maternity clothes, and religious vestments were not restricted.
To conserve money, hair was grown long.  Recycling hair pins and metal combs was done by all women on the homefront. Veronica Lake's long, wavy hair caught the attention of the public and women easily re-created the same style using their saved bobby pins or fabric curlers made from scraps.
One unforeseen effect of L-85 was the way Hollywood and the fashion industry capitalized on abbreviated clothing. Citing "morale building" as well as saving fabric, film stars and starlets were shown wearing shorts, playsuits, midriff tops, and swimsuits.  The two-piece swimsuit quickly gained popularity. 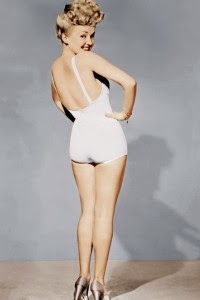 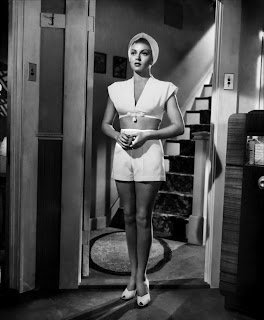 Lana Turner in THE POSTMAN ALWAYS RINGS TWICE
released in 1946
image from avsforum.com 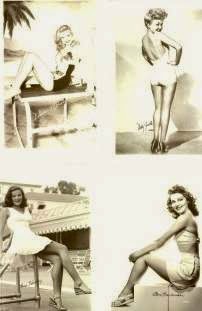 Another unexpected result was the scarcity of new girdles - the rubber used to manufacture them went to the war effort. Stockings were originally made of silk, then nylon.  After both became prohibited, a new industry emerged: leg make-up.  Ladies would rub this on their legs then draw a line up the back, usually with an eyebrow pencil, to simulate stockings.  The shortage of stockings in turn increased the popularity of pants for women.
Home sewing was heavily encouraged and pattern companies' business soared.  Hollywood patterns with a star in the upper left corner indicate they were produced during the war years and therefore complied with L-85. 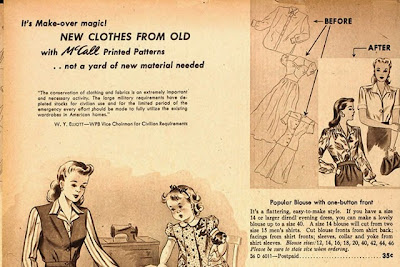 Patterns from the war years frequently show collarless dresses, plain blouses with no or very little pin-tucking or ruffles, dresses with a band rather a belt (this saved a metal buckle), embroidered trim, and short or three-quarter length sleeves.  Interestingly, millinery was not under ration regulations.  Most women took full advantage of this accessory.  Hats were designed in all styles and shapes.  Many sewing patterns for hats were also produced during the war years.
After the end of fighting in 1945, women chafed at wardrobe restrictions and information suggests the order was not strictly enforced.
On October 21, 1946, Order L-85 was formally revoked.

Many thanks to Sherri from sewbettyanddot for doing the collage of these 1940s patterns from the Pattern Patter Team on etsy. 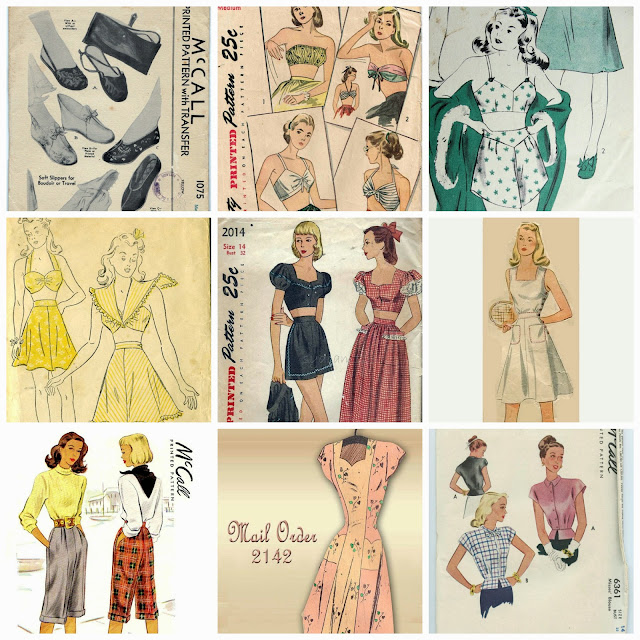 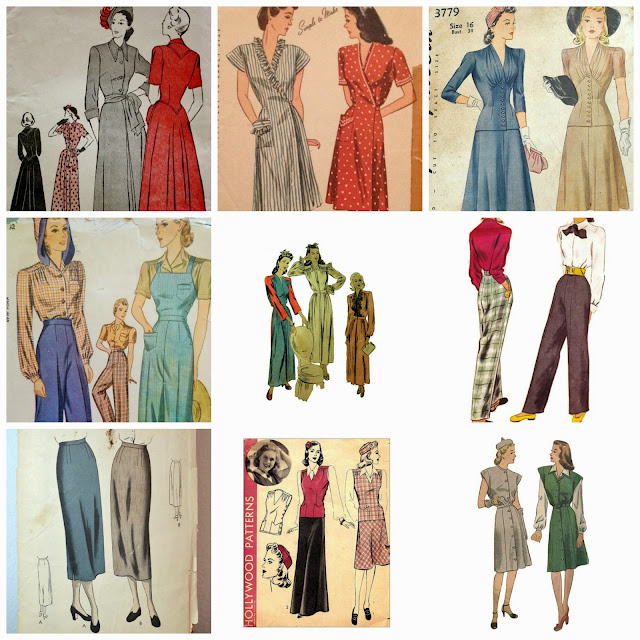 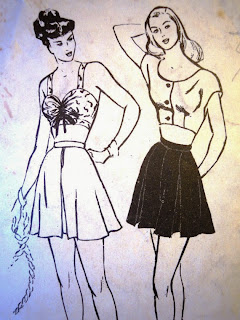 Row Eight - Simplicity 4754 from kinseysue (envelope is stamped that pattern does not conform to Canadian fabric restrictions.)

Wardrobe Accessories of the 1940's


Here's a collection of ways to accessorize your look as done in the 1940's.

I would love to have instructions for a boutonniere but, I didn't find one in my stash of things to make. I personally love fresh flowers and, given the choice, would most certainly choose the real thing.

A Turban is an easy hat to make!

I found this great pattern in a 1950's General Motors Employee Booklet.

An easy circle skirt with halter top sundress. Great addition to any girl's summer wardrobe! To Download this pattern for personal use, Click HERE.

These great 1950's styles were featured in Workbasket Magazine in the July 1952 issue. I looked high and low and found Anne Adams 4613 but did not find any copies of the other two. I did however find some similar styles! Check out the listings by members of the pattern Patter Team Below!

An amazing dress in size 14 with a 32 inch bust.
It includes the sundress, and 3 optional collars/capes. It would also be great with a bolero.

Next - 9196 I didn't find a copy of this exact pattern but did find one that is fairly similar. The neckline is identical the difference is the dress buttons on one side versus both sides.

Now that leaves the wrap skirt. I had this pattern at one time. It's a great versatile skirt. I found one that by pattern number seems to be from the same season.

We were looking for 9196 and found 9093. It's a wrap skirt not as unique as the target pattern but, it has two versions. It can wrap to the front or back, the pockets can be patch pockets or inset. Personally I prefer Version A. The clean lines are more my personal style!

Give you any ideas? Go grab some nice cool cotton and make a breezy dress or skirt for those hot summer days that are right around the corner!
Posted by MrsV at 12:51 PM 10 comments:

Be the belle at the beach this summer! Martex® offered this as a Free Pattern back in the 1960's. Go to the thrift shop or look on Etsy for some great vintage towels. Take two and make yourself a cute shift for the beach. The Fringe on this towel is an added bonus. Add the bead belt and you are bound to turn heads!

Sewing pattern sizes are very differently than Ready to Wear clothing sizes. Many people get confused by all of the variables. Add vintage pattern sizing into the mix and many throw their hands in the air.

The first thing that you need to do is determine your measurements. This is best done with some help. Measuring yourself is usually less accurate than if you have another person measure you.
Make sure to keep a sheet with your measurements and to make changes whenever necessary. This site has a great one: http://caromodello.com/fashion/measurements

Start at your high bust:

To find your high bust, measure under arms and straight across the back. Then wrap to front above your breasts.

Then Measure your full bust by wrapping around the fullest point of your bust.

So, if your high bust is 36 inches and full bust is 38, then your bust size is 36B. The high bust is the measurement that you will use to determine the bust size.

Next, measure your natural waist. Some can find their waistline easily, some can't. To find it, with the tape measure wrapped around your torso below your bust, bring it down tightening slightly as you go. When the measurement starts increasing, go back to the smallest area - ta da! Your waistline.

Hips. There are several measurements to take when it comes to hips. Hips go from below the waist to your high thighs. Again, if you can have somebody else help you, your measurements will be far more accurate.

See the awesome drawing to the  right. (See the original at: caromodello )

Basically the hip measurement that you need is where ever your hips are the largest.

Now that you have accurate measurements, it's time to figure out your pattern size(s).

Most of us are not one size top and bottom. So, you are going to use different measurements to determine the required size. If it's a blouse or top you are looking for, the high bust measurement is the one you want to fit. Alterations can be made more easily to other areas.
If it's a pair of pants or skirt, it's those hips! A dress - go with the high bust. Keep the skirt style in mind though! The image below shows the most common body types. Make sure the style you choose is appropriate for your body type. There is a flattering style for each and every one of us.

Most of all, enjoy finding the perfect pattern and making something beautiful.


To find the Perfect Pattern for you, Visit Pattern Patter Team Page on Etsy!
Posted by MrsV at 8:14 AM 8 comments:


Courtesy of Wendy from PatternMemories

Why not enlarge the pattern and create one for yourself! Easy pattern for a gusseted purse with nice shoulder strap.

Download the pattern HERE
Posted by MrsV at 10:22 AM 8 comments: