When are antique/collectible dealers also historians? Daily! As caretakers of items from our past, we strive to provide customers with as much information as possible. Dating an object is important. I'm sure many members of the Pattern Patter Team are also vintage sellers/collectors. Knowing a bit of history helps us date an object.
For instance, Susie Seller has a Simplicity pattern listed which she describes as from the 70s. However, the last line of the address on the sleeve reads: New York 14, NY. Her pattern can not be from the 70s. Zip codes arrived in 1963. Before that, zones were used from 1943 to 1963. They were instituted during WWII because so many mail clerks had been drafted and zones made it easier for the new, inexperienced clerks to sort mail.
When Simplicity stopped placing the copyright date on the inside of their directions sheet, there was a gap of a few years before they started putting it on the pattern sleeve. They used a zone in their address. Since Susie Seller's pattern has no date on the directions, it is likely from the late 50s to early 60s, or nearly 20 years older than she thought.

Zip Codes = 1963 and later
Of course we rely on the design of the dress or whatever, as well as hairstyles, to help us date a pattern. Mail order patterns are more difficult to date: many don't have the year in the postmark. Knowing a bit about postmarks as well as zip codes can aid us in dating our mail order patterns.

Postmarks
Over the decades U.S. Postmarks have gone through many changes. Most are round, some are oval. The combination of letters and numbers hold the clue to the approximate date. I use Cemetarian’s Dating Guide to help me date my Mail Order patterns. She sells a PDF, "Dating Sewing Patterns" for $9.95 that covers all of the major pattern companies as well as mail order postmarks.

As we beat the bushes for patterns, we come across other interesting items. Some dating information helps us decide if an object is as old as we think. A good rule to remember as we search: just because something is old does not make it valuable!

Items marked OCCUPIED JAPAN date from 1945 - 1952. I've seen buttons on the original card marked OJ. However, most OJ items are glassware, although I once sold a hanging wooden clothes dryer stamped Occupied Japan. I've also sold linens with a paper label which read MADE IN OCCUPIED JAPAN as well as sewing notions such as a tracing wheel and some sewing baskets. 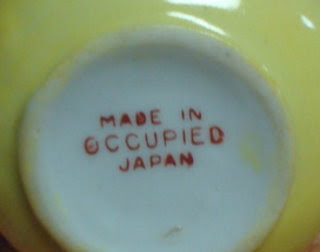 Glassware/porcelain was the most predominantly exported item from the German Zones. These are the years Poland exported many of their collectible Christmas ornaments. After WWII, border changes left a number of German glass factories in Poland.
As Czechoslovakia ceased to be one country in 1993, glass/porcelain from there is desirable, particularly colorful Art Deco designs. Vintage jewelry is sometimes marked Czechoslovakia. NOTE - During the 1920s, Czecho-slovakia was spelled with a hyphen.
Items made during the 60s and 70s are increasingly popular so the following trivia may help someone~~
BRITISH HONG KONG was used from the 1950s - 60s. I've frequently found this tag on vintage clothing and purses.
HONG KONG was used from the 1970s - 90s.
Patent dates are useful in dating items. There are numerous charts on the net which list the year and the patent numbers associated with it. I refer to the following - it's easier on my vintage eyes:
www.oldstuffonly.com/patent_dates.asp
There are many other ways to date our treasures but I've found the above information to be the most helpful to me personally. I hope it also helps my Pattern Patter colleagues.

Posted by EmSewCrazy at 6:51 PM