By Sherri of Sew Betty and Dot

We may not often give too much thought to collars, but the collar in its many forms is an important design element on a garment: when one says "Peter Pan," "sailor," or "Mandarin," we all instantly know what those specific collars look like. And the word "collar" features in several English-language idioms: "blue collar worker"; "hot under the collar"; and in law enforcement terminology, a suspect is "collared" (perhaps derived from the fact that policemen grabbed suspects by the belt and collar).

The history of collars is a bit murky, but it appears that they developed out of the drawstring edge of a chemise, the undergarment that men and women wore for centuries under their outer garments. That ruffled edge developed into ruffs--think Queen Elizabeth I--and then into other forms and shapes.

Until the early twentieth century, men's shirts had detachable collars (and cuffs)--because the body of the shirt was usually hidden under a waistcoat or jacket when the man was out in public, the fact that it hadn't been washed for several weeks wasn't readily apparent; filthy collars and cuffs, however, would be instantly noticed, so clean ones could be substituted much more frequently than the shirt itself was laundered.

Let's take a look at some collars--by no means an exhaustive examination--and observe how they change the look and feel of a garment. 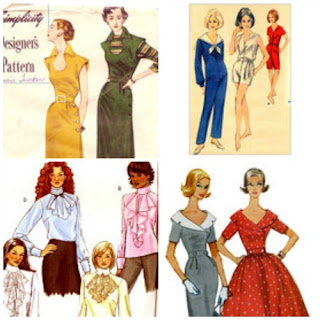 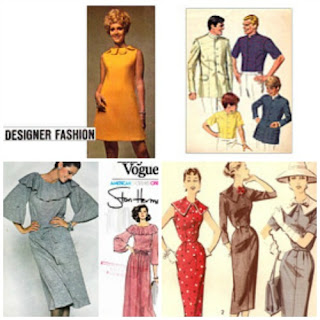 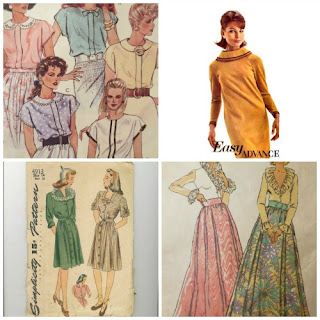 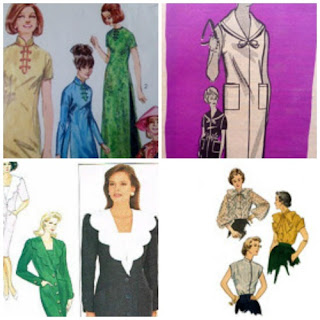 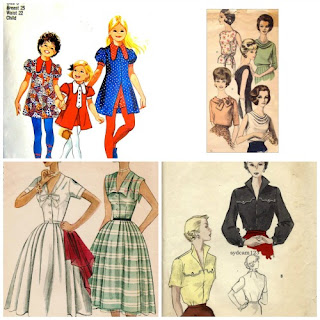 Picture yourself in one of these collar styles--which one do you prefer? Tell us in the comments If your favorite style is not pictured here, tell us about it.
Posted by sherri s. at 3:20 PM 6 comments:

By Ally B.  of Design Rewind Fashions

Lazy summer days are the things dreams are made of . . . unless you are a kid on summer break without a clue of what to do.   At some point we all hear those dreaded words, “I’m bored!”

Sewing is a wonderful way to keep kids entertained, help them learn a truly valuable life skill, and give you the opportunity to learn a little more about how your child works.

A few months ago I discovered Simplicity 8431 – a 1969 vintage pattern of zodiac transfers appliques. 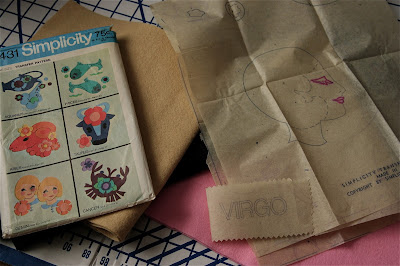 What I find to be the best feature of this pattern/transfer is the ease of making something children and adults will find adorable.  It is also a fun project to do during summer to give later for holiday or birthday gifts.

My middle school age daughters have not sewn much.  Since they both are fierce perfectionist, I wanted their project to be a little challenging for their skill set and yet give them a boost of confidence that sewing is fun when they saw their end product.  Keep this in mind when picking a pattern for a child or even for yourself if you are new to sewing. We all want our work to look like the pattern envelope – or better.   Vogue Couturier looks amazing but if you begin with items that are highly difficult to construct it is likely your project will never see the light of day. 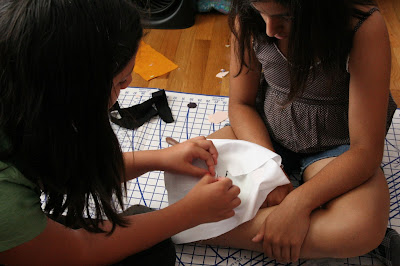 Most children have an innate desire to construct or create.  The process of choosing fabric to the thrill of operating a sewing machine (“something grown-ups do”) gives them a sense of ownership in the project.   My daughters chose to put their transfers onto pillows they would make (Simplicity 8431 does not come with pillow patterns – it is just the transfer so you will need to decide how to use it.  Placing the transfer on a book bag would also look cute too). 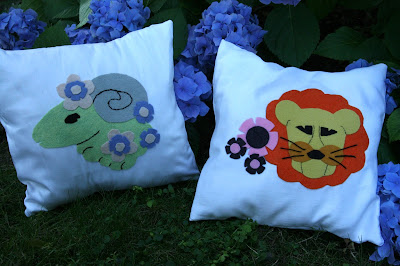 Their pillows turned out amazing!  What I love most is the pillows are just one outcome of this project.  We also spent a really fun day together and they helped each other learn skills the other had already figured out.  They also were beaming with pride when their creatures started to materialize from all the bits of felt. Yes, there were moments of frustration but they were short-lived and now they have their own, very unique pillows.  Well, until the holidays.  They decided to make pillows for all their aunts, uncles and grandparents.

Below is a small selection of patterns available in Etsy shops from some members of the Pattern Patter team.  These have been selected for their ease of construction.  Do you love to sew?  Take some time to teach the next generation.   They will always remember you for it!

By Sherri from Sew Betty and Dot

It's Christmas! (Well, it's Christmas in July, in any case--and for those who don't celebrate the holiday, there are patterns below that are great for any celebration).

Are you ready? Only five months to go! The Pattern Patter team has just celebrated Christmas in July with a big pattern blitz: tons of fun craft, doll, home dec, and Christmas patterns (as well as the usual fantastic selection of beautiful clothing patterns) were posted, just in time for some summer (or winter, if you're in the Southern Hemisphere) crafting. Why wait until November? Get started right now: set up your sewing machine right in front of the air conditioner (or heater), pour yourself some lemonade (or a cuppa), and off you go!


'Twas the night [or five months] before Christmas, and all through the house
Not a creature was stirring, not even a mouse.

The stockings were hung by the chimney with care,

In hopes that St. Nicholas soon would be there.


The children were nestled, all snug in their beds,

While visions of sugar plums danced in their heads.
And Mama in her kerchief and I in my cap


Had just settled our brains for a long winter's nap.

When out on the lawn there arose such a clatter,
I sprang from the bed to see what was the matter.
Away to the window I flew like a flash,
Tore open the shutters and threw up the sash. [Wrong sash, I know, but poetic license here!]

The moon on the breast of the new-fallen snow
Gave the lustre of mid-day to objects below,
When, what to my wondering eyes should appear,
But a miniature sleigh, and eight tiny reindeer,

With a little old driver, so lively and quick,
I knew in a moment it must be St. Nick.
More rapid than eagles his coursers they came,
And he whistled, and shouted, and called them by name:

As dry leaves that before the wild hurricane fly,
When they meet with an obstacle, mount to the sky;
So up to the house-top the coursers they flew,
With the sleigh full of Toys, and St. Nicholas too

And then, in a twinkling, I heard on the roof
The prancing and pawing of each little hoof.
As I drew in my head, and was turning around,
Down the chimney St. Nicholas came with a bound.

He was dressed all in fur, from his head to his foot,
And his clothes were all tarnished with ashes and soot;
A bundle of Toys he had flung on his back,
And he looked like a peddler just opening his pack.

His eyes—how they twinkled! his dimples how merry!
His cheeks were like roses, his nose like a cherry!
His droll little mouth was drawn up like a bow,
And the beard of his chin was as white as the snow;

The stump of a pipe he held tight in his teeth,
And the smoke it encircled his head like a wreath;
He had a broad face and a little round belly,
That shook when he laughed, like a bowlful of jelly.
He was chubby and plump, a right jolly old elf,
And I laughed when I saw him, in spite of myself;
A wink of his eye and a twist of his head,
Soon gave me to know I had nothing to dread;

He spoke not a word, but went straight to his work,
And filled all the stockings; then turned with a jerk,
And laying his finger aside of his nose,
And giving a nod, up the chimney he rose;

He sprang to his sleigh, to his team gave a whistle,
And away they all flew like the down of a thistle.
But I heard him exclaim, ere he drove out of sight,
"Happy Christmas to all, and to all a good-night."

There are loads more wonderful Christmas, doll, toy, and craft patterns (not to mention fabulous frocks for holiday soirees and outfits for the little ones to wear to see the Nutcracker) from Pattern Patter team members, so get cracking: you only have five months left!
Posted by sherri s. at 9:02 AM 4 comments:

Here's some eye candy set to period music from one of our own pattern patter peeps.
Posted by EmSewCrazy at 7:12 PM 5 comments:

by Amy Russo of Vienna’s Grace

As I watched videos of Paris and New York fashion week for Autumn /Winter 2013-14 season, a dominate design element kept popping up; hip draping. From Christian Dior to Guy Laroche, I noticed designers placing an prominent accent on the hips. Some with elegant tiny hip pleats, like Carolina Herrera (….oh how I love her designs), and quite a few others with very heavy hip sashes, like seen below from Vera Wang and Balmain. So I set out to see if these classic yet unique design elements could be found or even mimicked in our vintage patterns. Although some of the heavy hip draping would not be of interest to many of our buyers, how could they get that fashion trend in a much more wearable way? 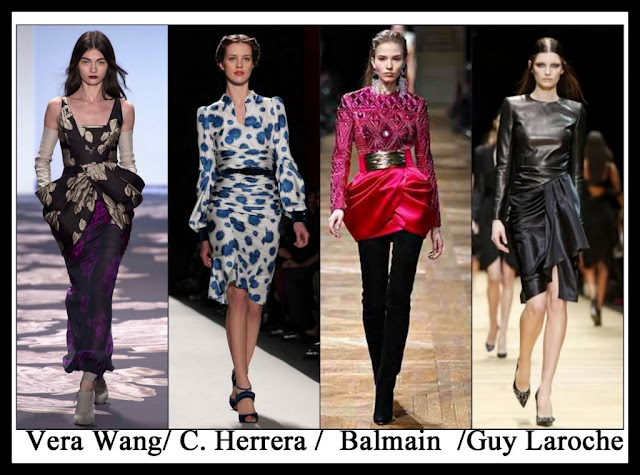 My eyes scoured page after page of Pattern Patter team members’ shops and I found so many ways to obtain the look of this hip draping trend. Below are just a few examples of the patterns and styles I joyfully discovered. You can see the illusion of hip width from a side bustle, gathered wide set pockets, and straight forward front seam rouching. I do think this has been a classic design trend for decades, but will it be in the ready to wear departments this fall? Well, if designers have anything to say about it, we will be seeing gathers, swags, hip pleats and side bustles. So when you are listing patterns for the Fall and Winter seamstress, take a closer look; does that 1940s dress drape or that 80s skirt swag? Try finding new and creative tags to describe this unique design element. Always remember to include patternpatter, the pattern era, bust size, and all the expected search phrases, but add one or two key descriptive words unique to the pattern. This will help the DIY fashion huntress add hip draping into her trendy, but not spendy wardrobe. 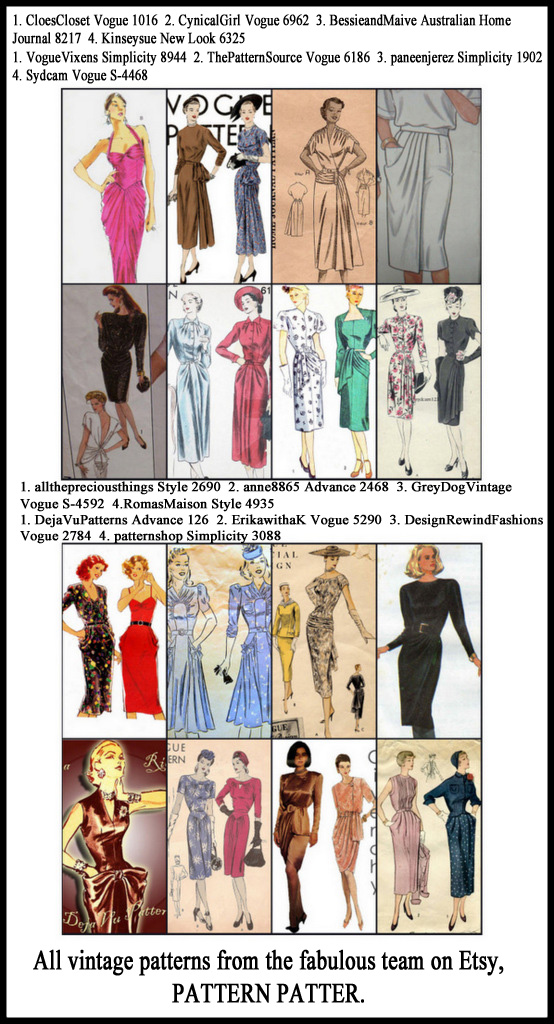 HoHoHo! Merry Christmas! As the sweat pours down and temperatures continue to rise for those of us in the northern hemisphere it's time for us to keep busy inside, getting a jumpstart on those Christmas plans. To help you in your endeavors, the delightful PatternPatter team is having a blitz today. You can see all the new listings in this thread, which also includes a list of shops offering sales. So what are we offering?


Things to keep you warm!
Where ever you are, I hope you are having a wonderful day! See ya around!
Posted by EmSewCrazy at 9:36 AM 3 comments: